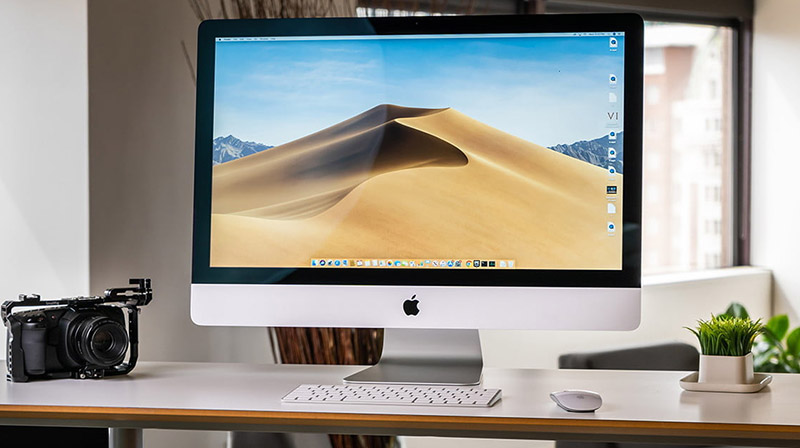 The last time there was a refresh in the iMac lineup was in March of 2019, after what felt like a long wait of two years. At that time, the 8th and 9th generation Coffee Lake processors were introduced. There was also an improvement in the Radeon Pro Vega graphic options which brought an improvement in performance from the 2017 models.

This iMac update was just an update on specs, with no changes to design. In fact, “the ultra-thin” body of the iMac 27 inch and 21.5-inch 4K and 5K iMacs are the same as they were in 2012. There was also no updating the display in 2019. The last update for the display came in 2017 when Apple said that they had created the best display that they had ever made. This update brought 500 nits brightness and 10-bit dithering for a much better color reproduction.

The Radeon Pro Vega graphic option is not standard. It is an add-on to the base iMac model pricing. The 27-inch 5K iMac is $1,799, and the 21.5-inch 4K iMac is $1,299. The higher end iMacs have an option for upgradable SSD storage for an additional cost. The entry level 2019s come with traditional hard drives.

Both models of the iMac 21.5-inch 4K can be reconfigured to include 32GB of 2666MHz RAM. The 27-inch iMacs can be reconfigured to come with as much as 64GB of 2666MHz RAM. Both of the new iMac models come with two USB-C Thunderbolt 3 ports which are important to most Apple users. They also have 4 USB-A ports, an SD card slot, a FaceTime HD Camera, and a microphone, among other features.

Apple also has available a lower end iMac that hasn’t received any updates. This lower-end iMac is just under $1,100. It has a 2K display with a 7th generation processor, which is an older processor. Professional Apple users can get the iMac Pro.

As mentioned above, Apple’s design for the iMac hasn’t changed since 2012. That was when the slim body display was introduced as well as the aluminum stand and aluminum boarder at the machine’s bottom. The 2019 iMac models have this design. There is a plug at the back for power, and ports available for connecting accessories. The 27-inch machines also have a rear hatch to make it possible to access RAM for the purposes of upgrading.

It’s possible to get iMacs with built-in VESA Mount adaptors to mount the iMac on a wall. These are available separately. For just $40 more, it’s worth it for many to pay for this add-on.

These are just some of the features of the 2019 iMacs. There are others we haven’t even touched on with this article. Is it enough to make you want to run out and buy one?